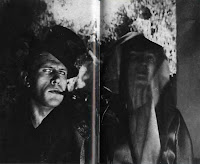 AUDIENCE COMMENT: Alisa Slaughter said...
I saw Saturday's show with some friends, two of them from Ukraine. We were all amazed! Such high quality, and such commitment, for a single weekend of performances! The collective apartment piece was absolute genius.

Kharmful Charms of Dani Kharms
Based on writings of Daniil Kharms
Devised by Ensemble
Conceived and Directed by Olya Petrakova
2 performances only
Friday, April 10 and Saturday, April 11th at 8PM

Daniil Kharms (1905-1942) was an early Soviet-era surrealist and absurdist poet, writer and dramatist.

By the late 1920s, his antirational verse, nonlinear theatrical performances, and public displays of decadent and illogical behavior earned Kharms - who always dressed like an English dandy with a calabash pipe - the reputation of being a talented but highly eccentric "fool" or "crazy-man" in Leningrad cultural circles. He was imprisoned in the psychiatric ward at Leningrad Prison No. 1. and died in his cell in February, 1942 -- most likely, from starvation, as the Nazi blockade of Leningrad had already begun. His writings (a vast assortment of stories, miniatures, plays, poems, and pseudo-scientific, philosophical investigations) were virtually unknown until 1970's, and not published officially in Russia until "glasnost".

This production is paying respects to Daniil Kharms' founded avant-garde collective OBERIU, or Union of Real Art, whose aesthetic centered around a belief in the autonomy of art from real world's rules and logic, and the intrinsic meaning to be found in objects and words outside of their practical function.