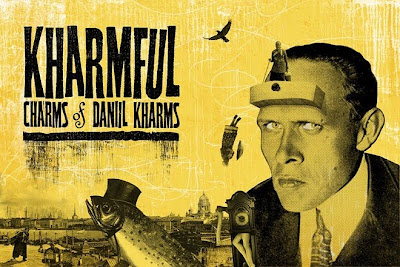 Declaring 2010 as the Year of the Absurd, ARTEL is making explosive (re)solutions to the New Year, beginning with detonating notions of theatre as a dramatic servant of literature. While English speaking academics are just now wrestling with Hans-Thies Lehmann’s ten year old articulation of a ‘post-dramatic theatre’, ARTEL ransacks a storehouse constructed eighty years ago by Daniil Kharms when he divined a creative practice of sluchai*, to propose its own poetics of perplexing alogical perspectives formulated for a new decade of twenty-first century theatre.

Daniil Kharms, an early Soviet-era surrealist and absurdist poet, writer and dramatist, was a post-modern artist before the term had any cultural currency. Kharms exploded the conception of theatre as a literary representative, defining the rules of theatre not as dramatic but scenic. By the late 1920s, his anti-rational verse, nonlinear theatrical performances, and public displays of iniquitous and irrational behavior earned Kharms - who always dressed like an English dandy with a calabash pipe - the reputation of being a talented but highly eccentric "fool" or "crazy-man" in Leningrad cultural circles. Exiled briefly during the “relatively vegetarian” days of the early 1930s, ten years later he was imprisoned in the psychiatric ward of Leningrad Prison No. 1. Kharms died in his cell – most likely from starvation – in February, 1942 as the Nazi blockade of Leningrad was well underway. His writings (a vast assortment of stories, miniatures, plays, poems, and pseudo-scientific/philosophical investigations) were virtually unknown until the 1970s, and not published officially in Russia until the late-1980s period of "glasnost".

ARTEL has found a kinship in the writings, theories and spirit of OBERIU (Union of Real Art), the avant-garde collective founded by Kharms, that adds a legacy and language to the ways in which the ensemble laboratory has been training performers and devising theatre since its inception. Kharmful Charms of Daniil Kharms is therefore presented as homage to OBERIU whose aesthetic centered on a belief in the autonomy of art from the real world's rules and logic as well as the intrinsic meaning to be found in objects and words outside of their practical function.

By ‘Real Art’, OBERIU intended the creation of an artistic language that refused symbolism and subtext as a means to present realism. The Oberiuty rejected literary drama, in which all the elements are subordinate to the dramatic plot, that is the play as ‘a tale told by people about something that happened’, and in which everything is done on the stage in order ‘to explain the meaning and the course of the events more clearly, more comprehensibly, and in a more life-like way’. ‘Theatre’, said the Oberiuty, ‘has nothing to do with that.’

OBERIU embraced a creativity that demanded “the transformation of the forms of private life into a fact of art”. The promotion of an aesthetic and ethos that blurs life and art has been a main line of research for ARTEL, and coupled with the notion of ‘scenic plot’ was a central dramaturgy for the Bulgakov variations over the last three years.

Derided as literary hooligans in the increasingly hostile atmosphere of 1930s Stalinism, OBERIU survived as a collective for only a few short years, but are considered “the last of the Soviet avant-garde”.

As the cultural weather continues to fluctuate in our own tumultuous times, Kharmful Charms of Daniil Kharms disrupts the experience of daily entertainment routines, challenges the central questions around the role of art, the responsibility of artists, and the creative capacity of all living citizens, and ultimately aims to provoke an incident of love.

You want to find the laws of normality and logic which you think you see in life. But you will not find them here. Why? Because an object and a phenomenon transferred from life onto the stage are no more dependent on the laws of ‘life’ and acquire laws of another kind, those of the theatre. We are not going to explain what they are. To understand the laws of a theatrical presentation you have to see it.

After a riotous oversold presentation of the workshop production last spring, ARTEL – a mad-gang of artisanal scientists comprising the underground American Russian Theatre Ensemble Laboratory – brings Daniil Kharms back with a vengeance! And he is more charming, macabre, and scintillating than ever! Kharmful Charms of Daniil Kharms is an original decadent comedy illogically formulated from Russian Surrealist and Absurdist motifs, constructed as an evening of not-so-innocent commotions and antics, vignettes and dreamlike incidents, all set to a rousing live musical score.

Produced by viaCorpora International Performance Research and Development House and Don Cesario
www.viacorpora.com
Posted by ARTEL at 1:19 AM